Century Square Luxury Cinemas Online Contest Official Rules
No Purchase Necessary
1. ELIGIBILITY: Open only to legal residents of the United States (void in Puerto Rico), 18 years of age or older. Employees, officers, directors, agents, representatives, and the immediate family members of Sponsor, their parent companies, affiliates, subsidiaries, advertising, promotion agencies and promotion partners are not eligible to enter. Contests are void where prohibited by law. All federal, state and local laws and regulations apply.
2. HOW TO ENTER: NO PURCHASE NECESSARY. You can enter our Online Contests via the Internet. To enter, access one or more of the following social media platforms [facebook.com], [instagram.com], and [twitter.com], and register for free to open an account. Follow the @centurysquareluxurycinemas [Facebook] account, the centurysquareluxurycinemas [Instagram] account and @csluxcinemas [Twitter] account. BY ENTERING, YOU AGREE TO THESE OFFICIAL RULES. Entries that are late (including delayed data transmissions), forged, illegible, mutilated, incomplete, misdirected, or otherwise not in compliance with these Official Rules will be disqualified. One (1) entry per contest is allowed. Entries that exceed that number will be determined to be void.
3. SELECTION OF WINNER: Winner will be selected by random drawing from all eligible entries by Sponsor, whose decisions are final in all respects. There may be only one winner per household per calendar month. Odds of winning depend on the number of eligible entries received. Potential winner will be notified by Sponsor through the social media account that the Contest is being hosted on. If a potential winner cannot be reached after a reasonable effort has been exerted during one (1) day from the date of the first attempt to contact potential winner, or if potential winner he/she is found to be ineligible, or if he/she cannot or does not comply with these Official Rules, an alternate winner may be selected.
4. PRIZES: Are contest dependent. All incidental expenses and taxes not specified herein will be the sole responsibility of the winners, including without limitation, federal and state taxes. Total approximate prize value is dependent on the prizes offered. No cash or prize substitution is allowed except at the discretion of the Sponsor. If a prize cannot be awarded due to circumstances beyond the control of the Sponsor, a substitute prize of equal or greater value will be awarded. Prizes are not transferable. Contest winners must physically appear to claim their prize. All prizes unclaimed after seven (7) days from the date awarded may be awarded to an alternate winner.
5. CONDITIONS: By entering, participants agree to be bound by these complete Official Rules. All federal, state and local laws and regulations apply. All applicable federal, state and local taxes are the responsibility of the prize winner(s). Sponsor, their officers, directors, parent companies, affiliates, subsidiaries and advertising and promotion agencies, and promotion partners are not responsible for, (i) late, lost, delayed, damaged, misdirected, incomplete, stolen, postage due or illegible entries; (ii) any injuries, losses, or damages of any kind caused by the prize or resulting from acceptance, possession, or usage of the prize; or (iii) printing, distribution or production errors. Return of prize or prize notification as undeliverable will result in disqualification and an alternate winner may be selected. Entry and/or acceptance of prize(s) constitutes permission for the Sponsor and their agencies to use the winners’ name, address (city and state) and/or likeness for advertising and trade purposes without further compensation or authorization, worldwide and in perpetuity, in any and all forms of media, now known and hereafter devised, including without limitation Internet, unless prohibited by law. Any person attempting to defraud or in any way tamper with the contests will be ineligible for prizes and may be prosecuted to the full extent of the law. If, for any reason, a Contest is not capable of running as originally planned, such as tampering or infection by computer virus, Sponsors at their sole discretion reserve the right to modify, suspend or cancel the contest. Void where prohibited.
6. DISCLAIMERS: Sponsor and Contest Entities are not liable for losses or injuries of any kind resulting from acceptance/possession and/or use/misuse of prize(s), participation in contest, or any technical malfunctions of the telephone network, computer Internet system, computer dating mechanism, computer equipment, software, or any combination thereof, or any entries that are late (including delayed data transmissions), tampered with, garbled, incomplete, misdirected, lost, illegible, or otherwise not in compliance with these Official Rules. Sponsor is not responsible or liable for any injury or damage to an entrant’s or third person’s computer and/or other electronic devices and/or their contents, related to or resulting from a Contest.
7. COPY OF OFFICIAL RULES/WINNERS LIST: For a copy of the Official Rules or the names of the contest winners (please specify along with the specific contest), send a self-addressed, stamped envelope to: Online Contest c/o Century Square Luxury Cinemas, 1907 West State Street, New Castle, PA 16101. 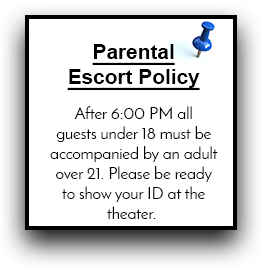 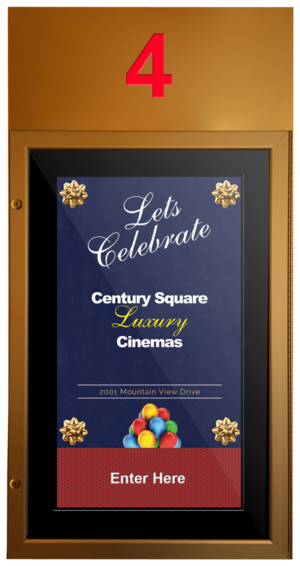